Nuls is a customizable blockchain infrastructure and a global blockchain open source community project. Nuls consists of micro-kernels and modules. Through the reorganization of events and services we have achieved a highly modular underlying architecture. This includes intelligent contracts, multi-chain parallels, cross-chain consensus and other operational mechanisms. This document covers some the details of the smart contract.

In software development, it is important to remember that “repetition of invention wheels” is particularly important on the shoulders of giants. The blockchain industry itself encourages an open, shared and virtuous ecology. When designing the smart contract module, we needed to learn from the successful smart contract designers.

Ethereum's smart contract is to build its world state through the account model, and record and execute world state changes through transaction messages and state transition functions. This design is very subtle and groundbreaking.

Then we look to the Corda project of R3 organization. Based on Java construction, the Java virtual machine is directly used in the smart contract, and the smart contract logic is realized by implementing the preset Java interface. Compared with Ethereum, its application area determines that its smart contracts only focus on "validation" rather than Ethereum's versatile smart contract platform.

Then there is the super-book project. The concept of the super-book is similar to that of the Nuls. It is modular, loosely coupled, and pluggable. The interesting part of its smart contract design is to put the contract into Docker. Executed in a separate container, the currently supported high-level languages are Java and Go. However, this is one of its drawbacks, because Docker startup is very fast, but it is very time consuming compared to the lightweight VMs of other blockchains. However, this is also related to the application prospects that are not defined as public chains. The more suitable areas are the alliance and private chain environment of enterprises and institutions.

There is also a multi-asset concept project than the original chain project. The bottom layer runs a multi-asset UTXO model, so its smart contract innovatively uses the UTXO collection as the storage unit of its world state. The effective organization of the UTXO model is very useful.

The contract module is part of the entire Nuls modular technology ecosystem and is a fully autonomous module. Collaborate with other modules through Nuls' modular contract to provide an on-chain programmable environment.

Each bytecode command executed by the virtual machine will charge a certain fee according to the amount of calculation. This is called GAS in Ethereum, and Nuls retains this design concept. Each instruction is billed according to the length of its operation. At the same time, in order to ensure efficiency, there is an upper limit for the billing of the entire contract. After the upper limit is exceeded, the contract will fail to execute and the status will be rolled back, but the cost already consumed will not be returned. If the submitted fee has not been fully consumed after the execution is completed, the remaining portion will be returned to the contract caller. The reason for setting the cost cap is also to eliminate the problem of infinite loop calls.

The contract is written to support high-level languages. Java is the first supported language to be used when the contract module is online. The languages on the JVM, such as Kotlin, Scala, and Groovy, will be quickly supported. We also welcome community contributions. A high level language support.

The status of the contract can be opened to the outside world through the API. There are many methods built into the contract that can be called directly in use, such as hash algorithms, random numbers, and so on.

We will build a world state in Nuls, and every contract-related transaction in Nuls will cause the state of the world to change. The status can contain arbitrary data.

f represents a functional method in a smart contract. The core idea of the Nuls smart contract is to read the S and the contract transaction T as the input of f, thus converting the state from S to S'.

Null's blockchain stores all historical transaction data that can change state, so the latest block is the current state. Of course, Nuls does not save these states on the block, so the block is too large. The block only saves the root hash of this world state. On the one hand, the miners of Nuls will verify the status of the previous block execution. On the other hand, in order to compete for the bookkeeping rights, the miner will put the received transaction into the corresponding contract and put the final state into the new block. Announced. 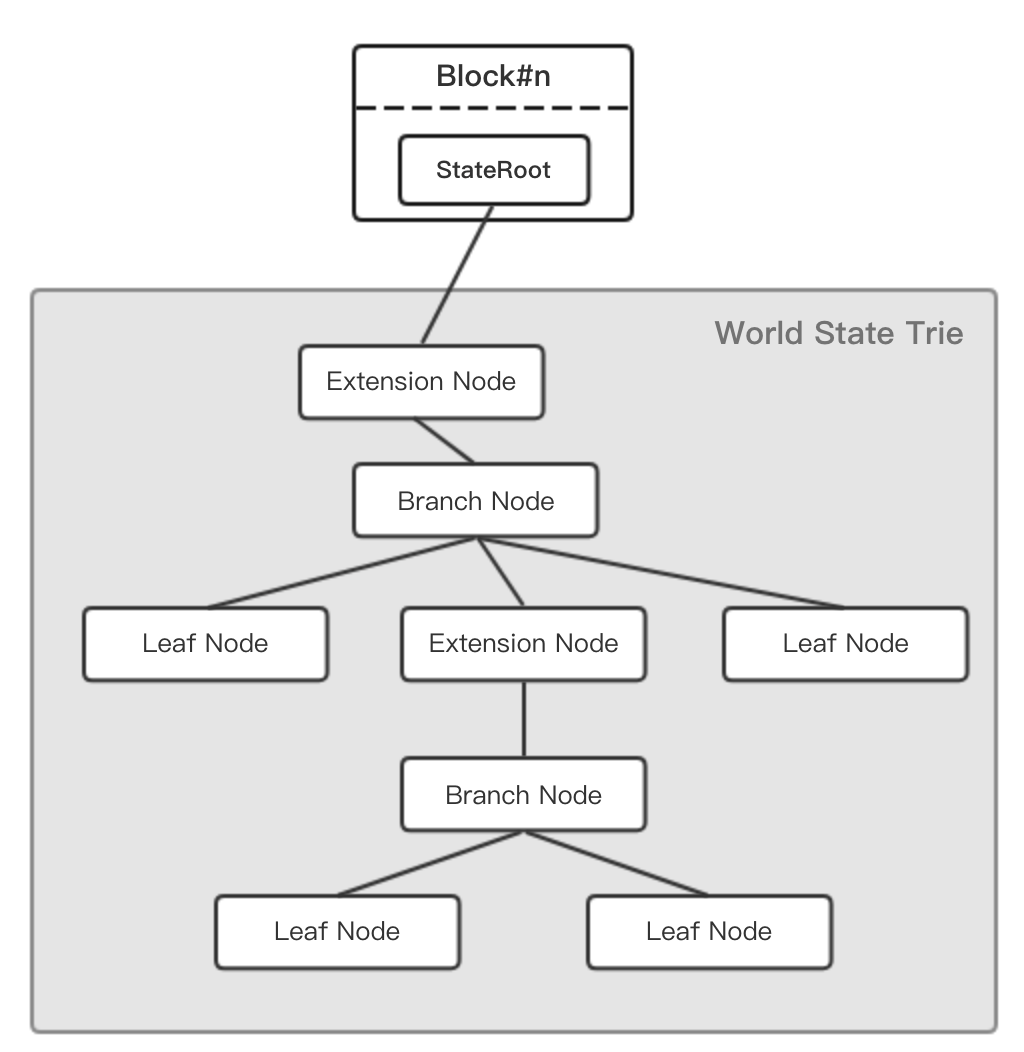 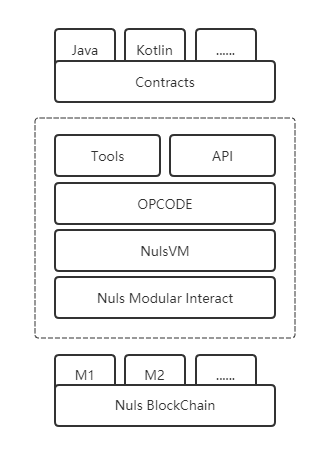 The above picture shows the overall architecture of the smart contract. The core is built around the Nuls virtual machine. The virtual machine provides a way to access the state of the world. The world state is stored in the storage module of Nuls. OpCode is a bytecode, and Nuls implements a minimum set of bytecodes that support Turing's completeness, with the goal of fast startup while maintaining Turing integrity. Tools is a toolbox that provides a range of tools that include bytecode compilers, template methods, SDKs, and more to enhance and simplify development. The API is the entry point to the access contract, and the world state of the contract can be easily queried through the API.

Although the state of the world only increases part of the change, its storage capacity will still accumulate relatively large. So in the future, a snapshot method may be implemented to compress all data with a certain history into the latest state, and all the changes before this state. They will be cleaned up.

We will provide support for light nodes. Nuls users do not need to obtain a complete world state history, rather just get the latest world state.

The design of this NulsVM is based on the design of the JVM. It has been simplified and modified for the needs of the intelligent contract engine to achieve the simplest and most efficient virtual machine.

The Nuls virtual machine can make errors in some cases, such as stack overflow and illegal instructions, lack of gas, and so on. When an exception occurs, the virtual machine stops executing immediately and returns an error.

Each time a contract code is executed, a new virtual machine is started. Unlike some other virtual machines, there is no shared space like these heaps between these virtual machines. Nuls guarantees that the same contract can only be executed in the order in which the call is executed by calling and dependency analysis. Different contracts can be solved in parallel. This not only ensures the orderliness of the contract, but also ensures high efficiency.

For economic and efficiency reasons, the contract engine executes code, on the one hand, to prevent the contract from being executed without termination, and on the other hand, urges the developer to write efficient contract code. Each specified operation will have a specified cost, and the cost is calculated using gas.

The cost is calculated as:

The entire price list will be given in succession.

The contract transaction has several parameters.

Deploying a contract is also a message call. It needs to pay fees. The cost refers to the previous section. When the contract is created, it will receive parameters such as sender, contract code and GAS limit. The contract module will open a separate storage area in the storage module and assign a separate hash address, and generate a contract account with a transaction count of 0. The hash root will be empty. In the account layer section, the output of this transaction is a result of a balance of 0, except for the transaction fee charged by the miner. That is, the contract is not allowed to transfer the contract when it is created.

If there is a function method in the contract that affects the storage, access can only be called through the contract transaction. It is initiated via the underlying normal address.

The contract module also provides an interface that can access the contract according to the address. The interface can get all the function method definitions of the contract. The method "read" of the contract method can be called directly through the api. The api calls a method that can "write". Calling the "read" method does not require payment of the gas fee.

The result of the contract call will form a coded output, the most direct is the root hash of the world state, and the result of the execution, the amount of gas, and so on.

The contract can't be destroyed, but it is marked as no longer available. This is because the state root of each block can lead to a complete world state. Different blocks correspond to the world state at different moments, so when the contract is deleted, the previous world state cannot be built, so the miner will not be able to verify each historical block. When the user calls the destroyed contract, an error is thrown. We encourage developers to control the life cycle of contracts themselves in contract code.

The contract provides high-level language support and will gradually support the main languages based on the Java vm (jvm), which includes:

In the future, we will support more advanced languages, including but not limited to:

The high-level language supported here is only the support of its syntax - not all the features of the language. We have removed instructions and features in order to keep the virtual machine simple and efficient. The following features are not supported:

Through examples, you can get a clearer idea of how to write smart contracts. Several representative examples are provided:

Getting Started Example NRC20-TokenClick to enter

There are some contract examples on Github: