The SCO platform allows projects to use smart-contract based POCM (Proof of Credit Mining) to create a SCO (Staked Coin Output) node. NULS holders can stake into the projects' SCO nodes and receive the newly-generated project tokens, instead of their usual NULS staking rewards. The SCO project node continuously earns the NULS staking rewards that would otherwise be rewarded to the NULS stakers, and projects can use the rewards to bootstrap and help fund development. The SCO platform and POCM allow this same functionality to be used with any public chain or assets in any blockchain ecosystem

POCM is a decentralized product based on smart contracts. Users (especially project issuers) can familiarize it with the operational process in the test environment, avoiding misuse and causing asset losses.

You can stake your NULS to the project you like, and then you can get Token from the project, and the NULS used for staking will not be lost. The steps of NULS holder participation on the POCM platform are as follows:

On the pocm platform, click the [Select Item] menu, enter the page and select the approved item, click to enter the item details page. 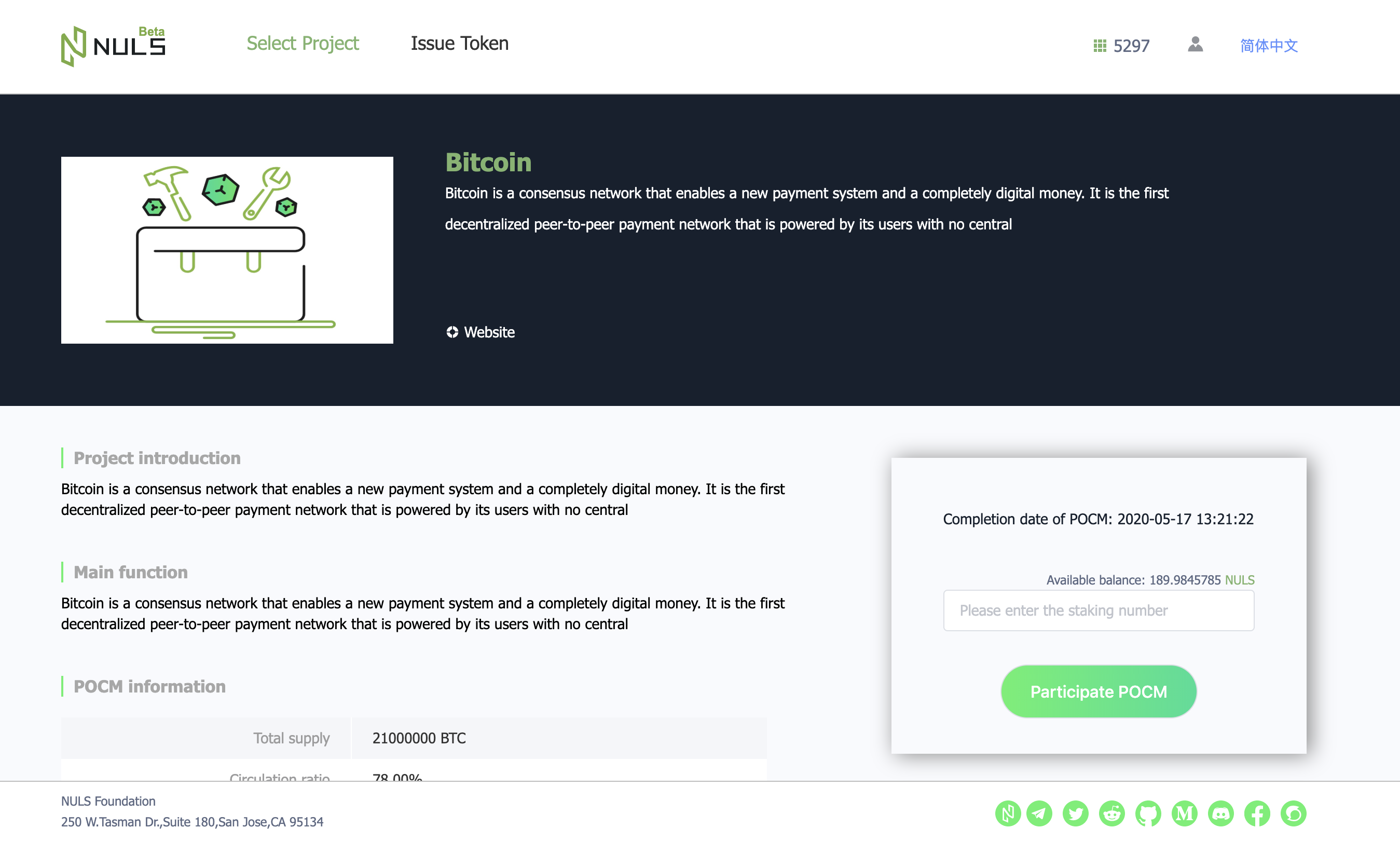 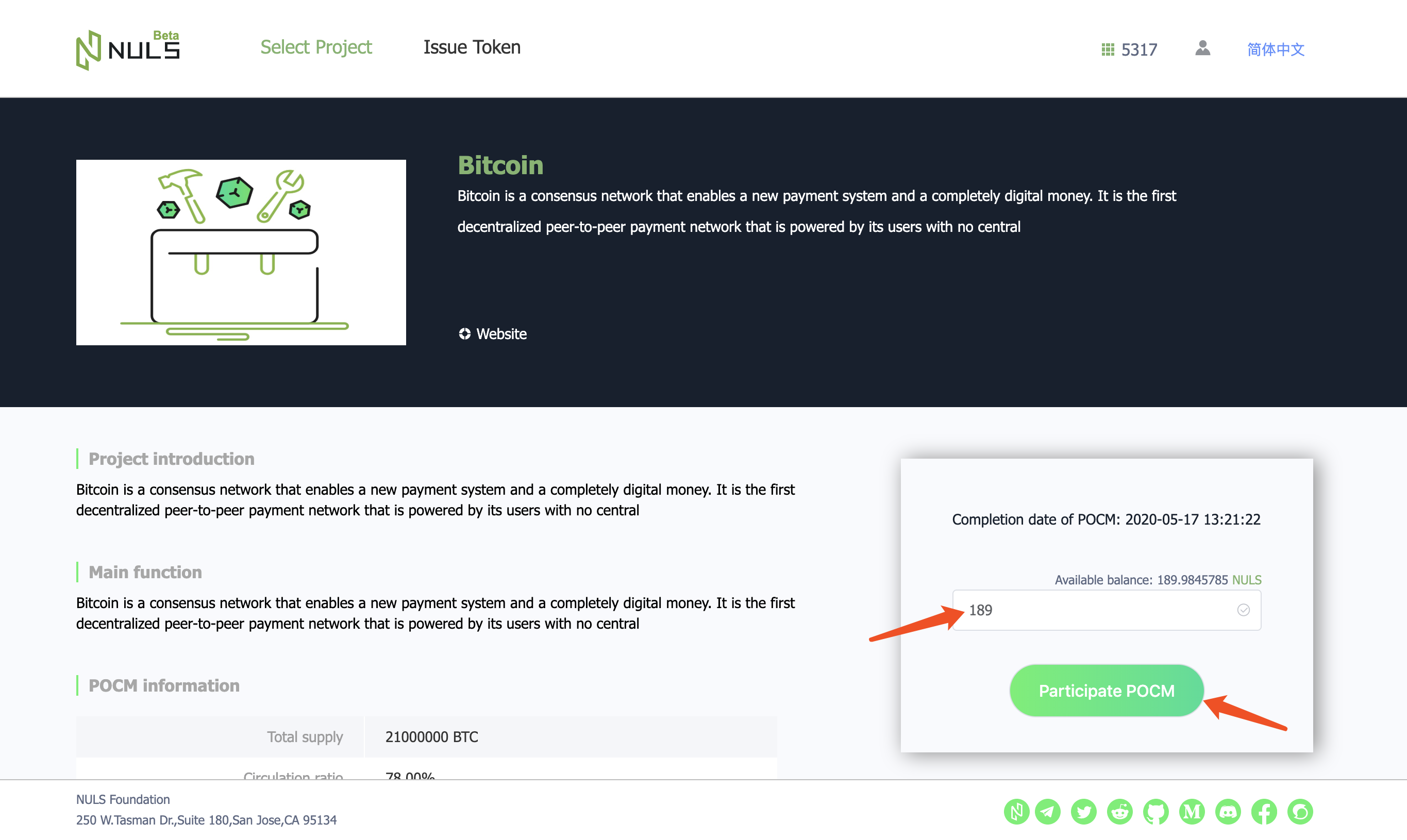 The contract will be awarded once every 5 blocks.After the reward is issued, the user needs to click the [Receive reward] on the right side of the [User Center] page. After the successful receiving, the contract will transfer the rewards to the participating address in real time. After the lockout time is over, the Token can be used (the specific unlock time can be viewed in Project details)

Receiving a reward is an operation that calls a contract, so you need to consume a small amount of NULS 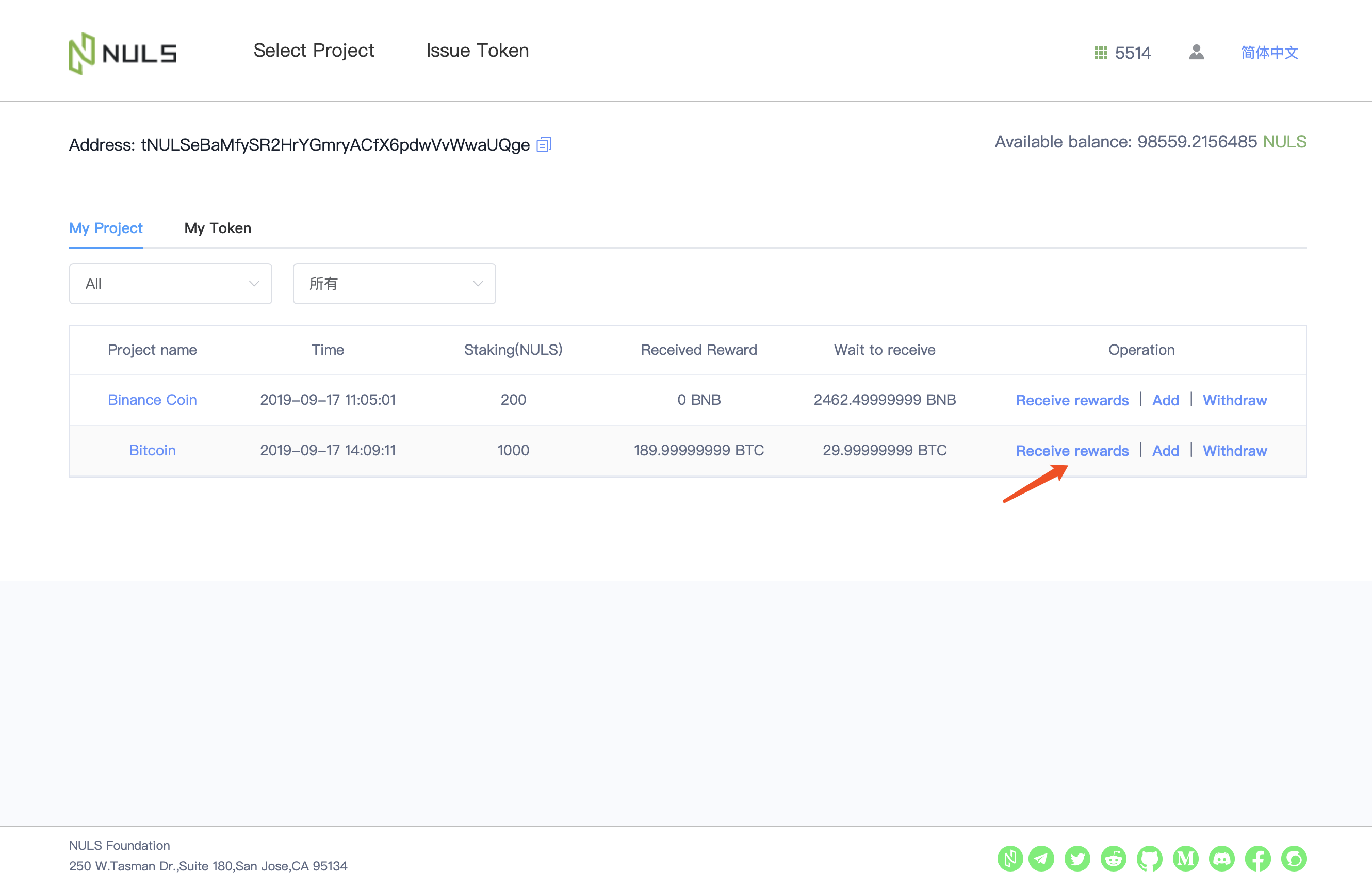 The user can continue to participate in the pocm of a certain item in the project details, or add it via the [ Add ] button on the right side of the participating item list on the [User Center] page.

You can use POCM (SCO distribution platform) to attract NULS community members as the first group of supporters, continue to obtain NULS consensus reward as the project development fund, and get full empowerment of NULS community and ecology.The steps to participate are as follows:

Click the [Select Project] menu on the pocm platform, enter the page, click the [Issue Project] button and fill in the basic information and submit 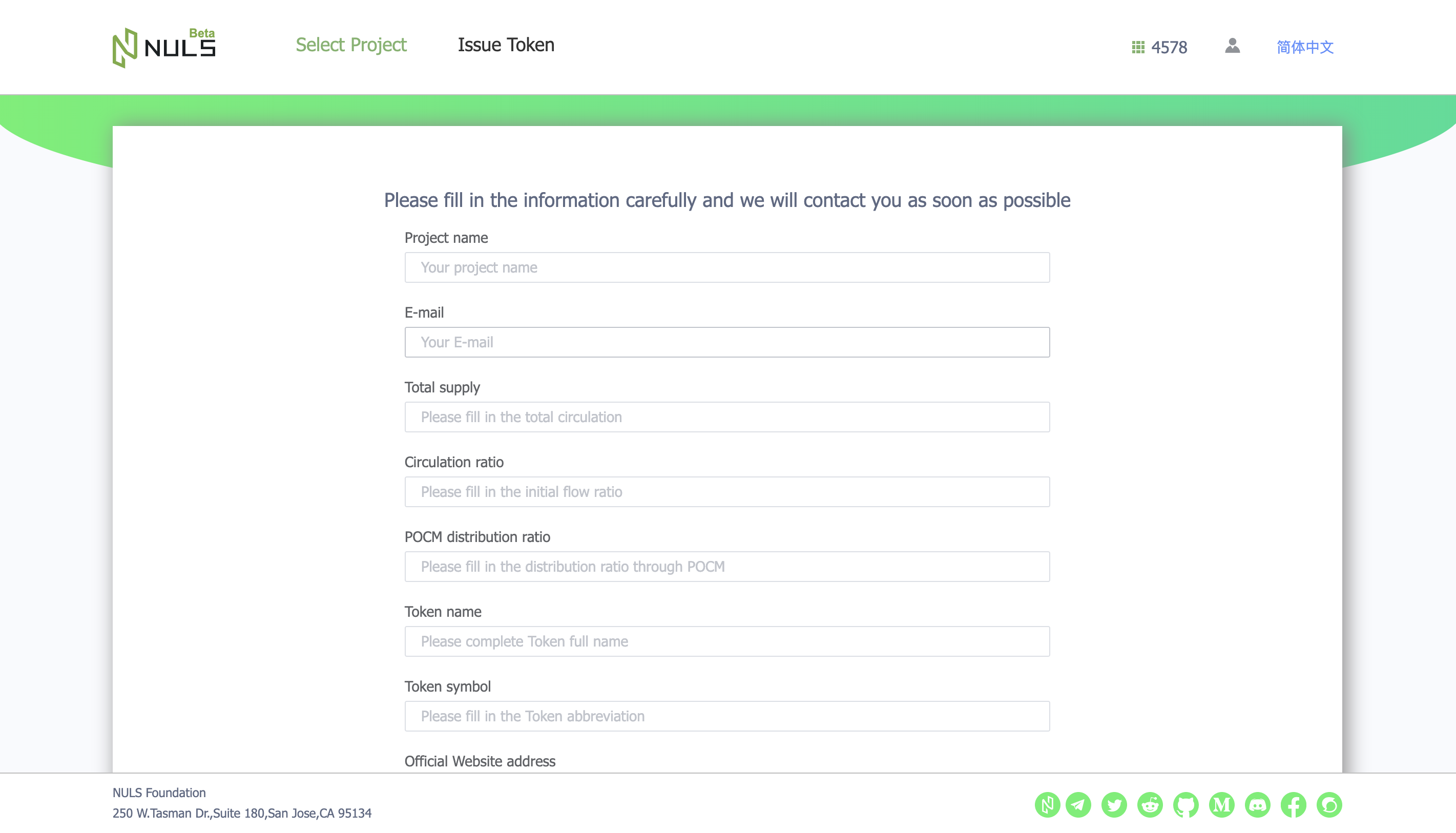 Click the [Issue Token] menu on the POCM platform and click on the NRC-20 token issued by yourself in the form to fill in the entry information (please pay attention to re-fill the token name and symbol completely and accurately, and need to be the same as the previous step) Token information be consistent) 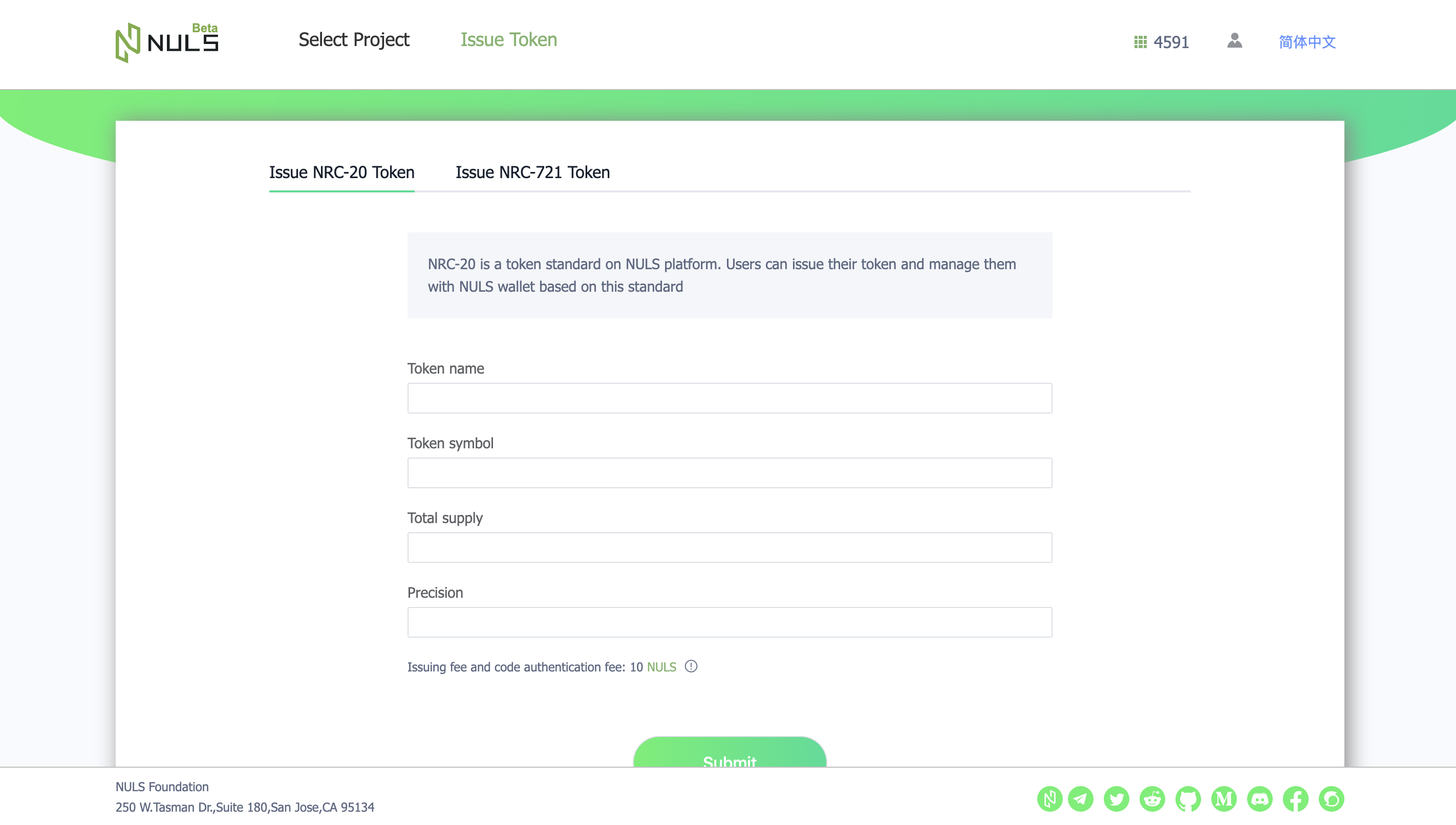 After the basic information is submitted, the project team needs to send an email to the email address: pen@nuls.io. The content of the email is as follows:

After receiving confirmation from NULS that their project has been approved, users can import their POCM account to the POCM platform and enter the [user center] page to issue POCM contracts. 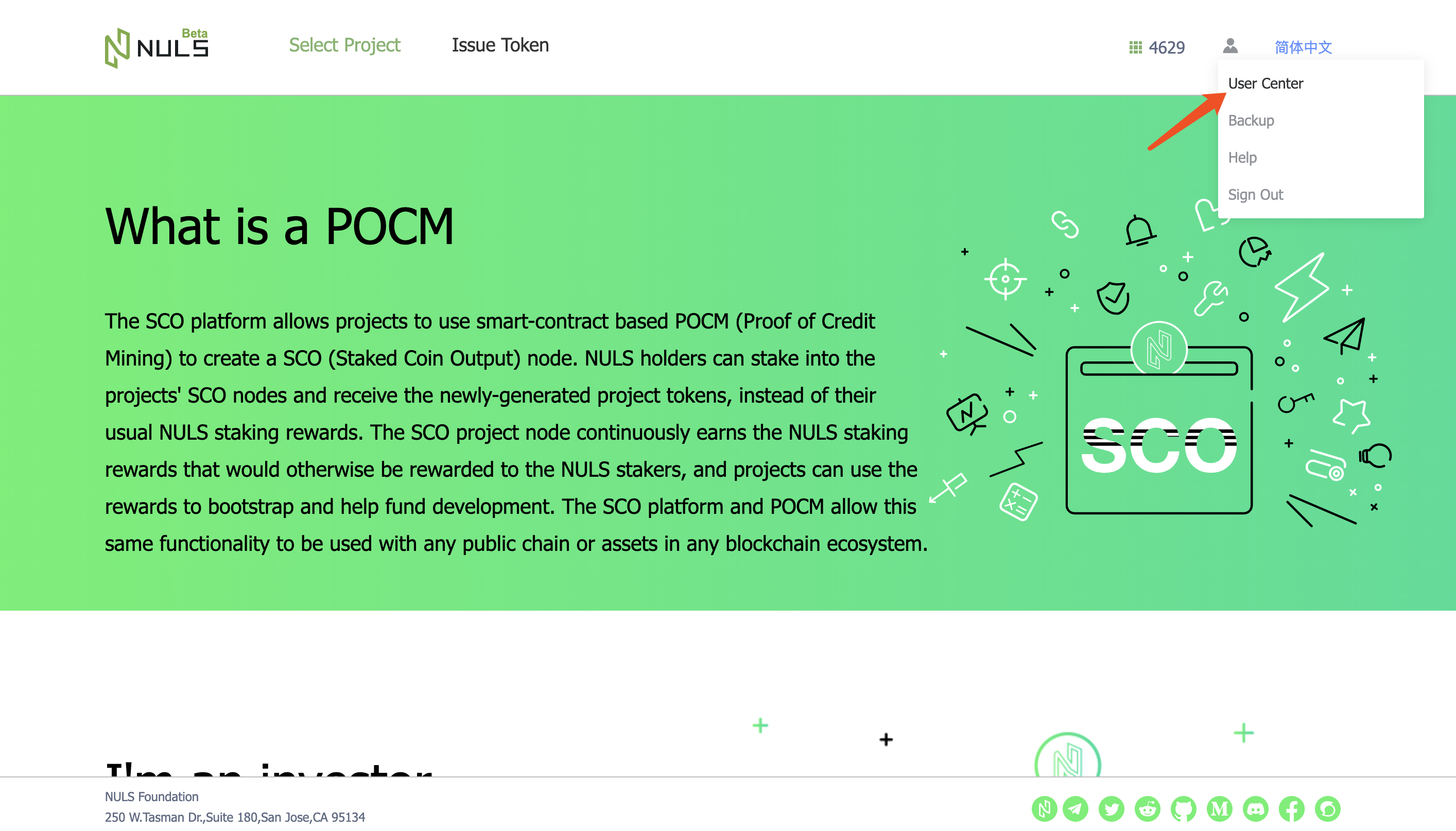 Fill the form and publish the contract according to the project team's own POCM distribution rules. 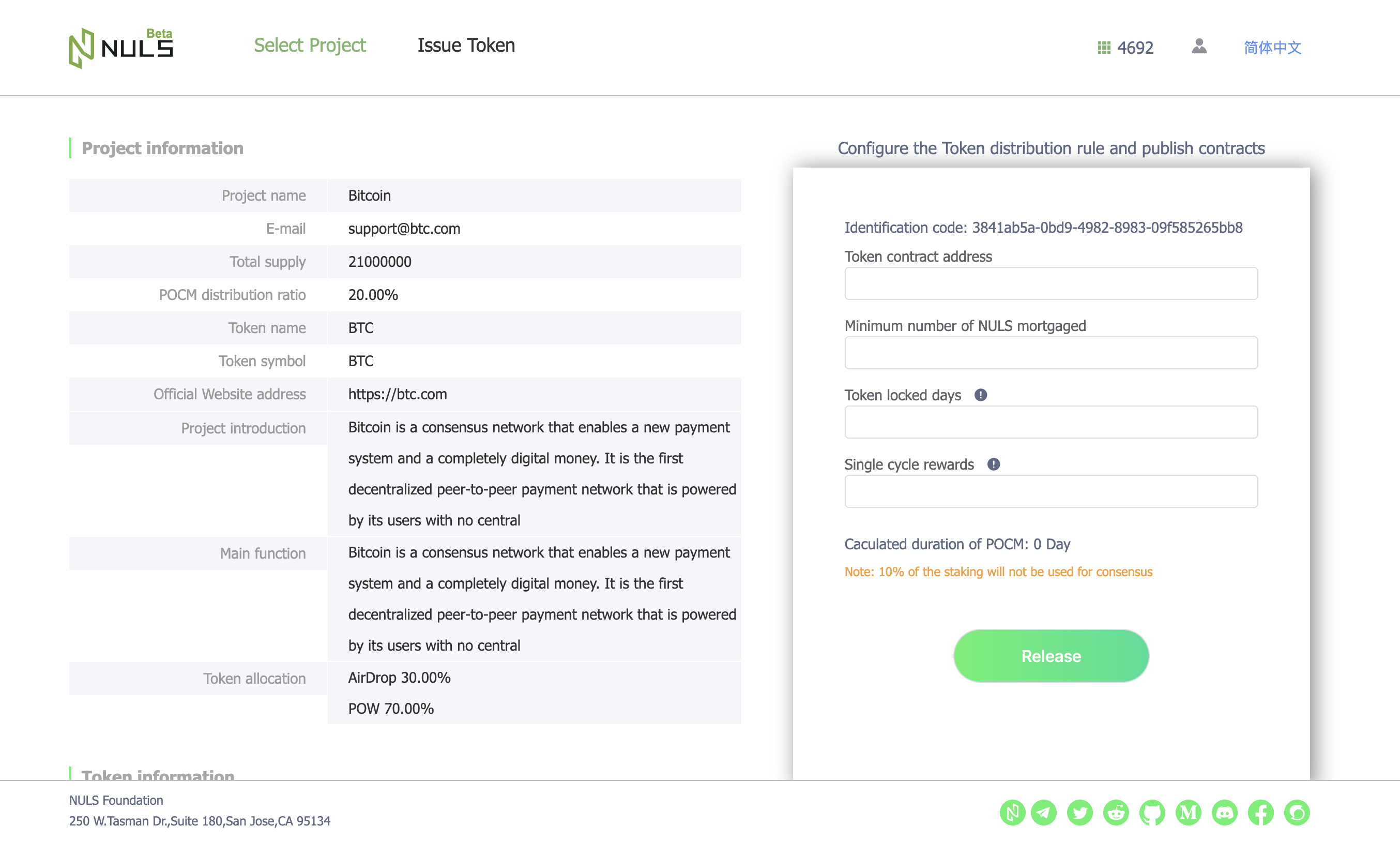 # Transfer the token to the contract

Import the address holding the token into the wallet, go to the [ Contract ] page, find the token and click [ call ] 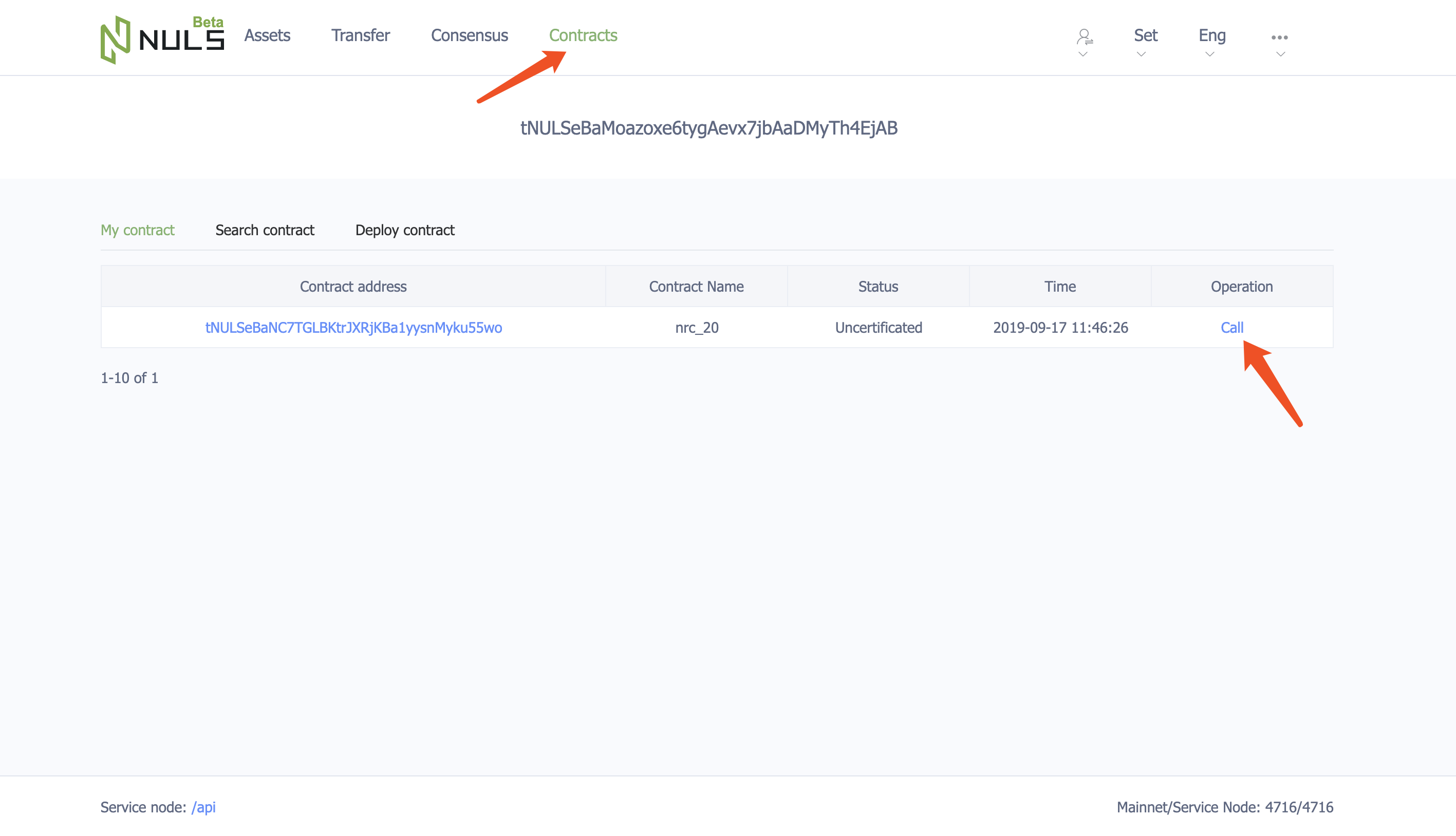 Go to the calling page and select the transfer method of the token contract. 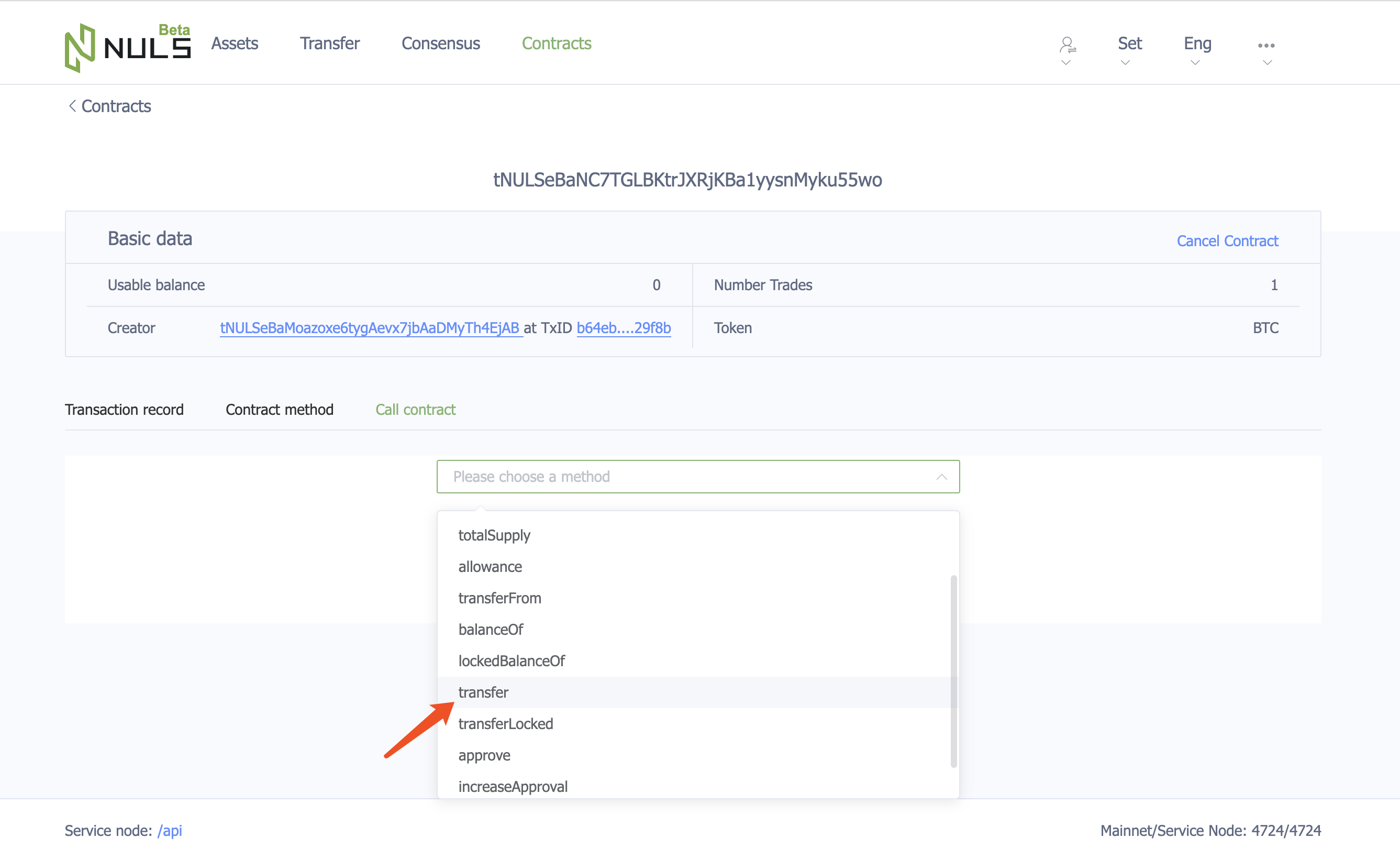 Fill in the POCM contract address that has been successfully issued, and then fill in the number of Tokens transferred (because of the calculation unit, you need to add n zero after the actual number,n = the decimal of the token you issued ） and finally click [ call ] 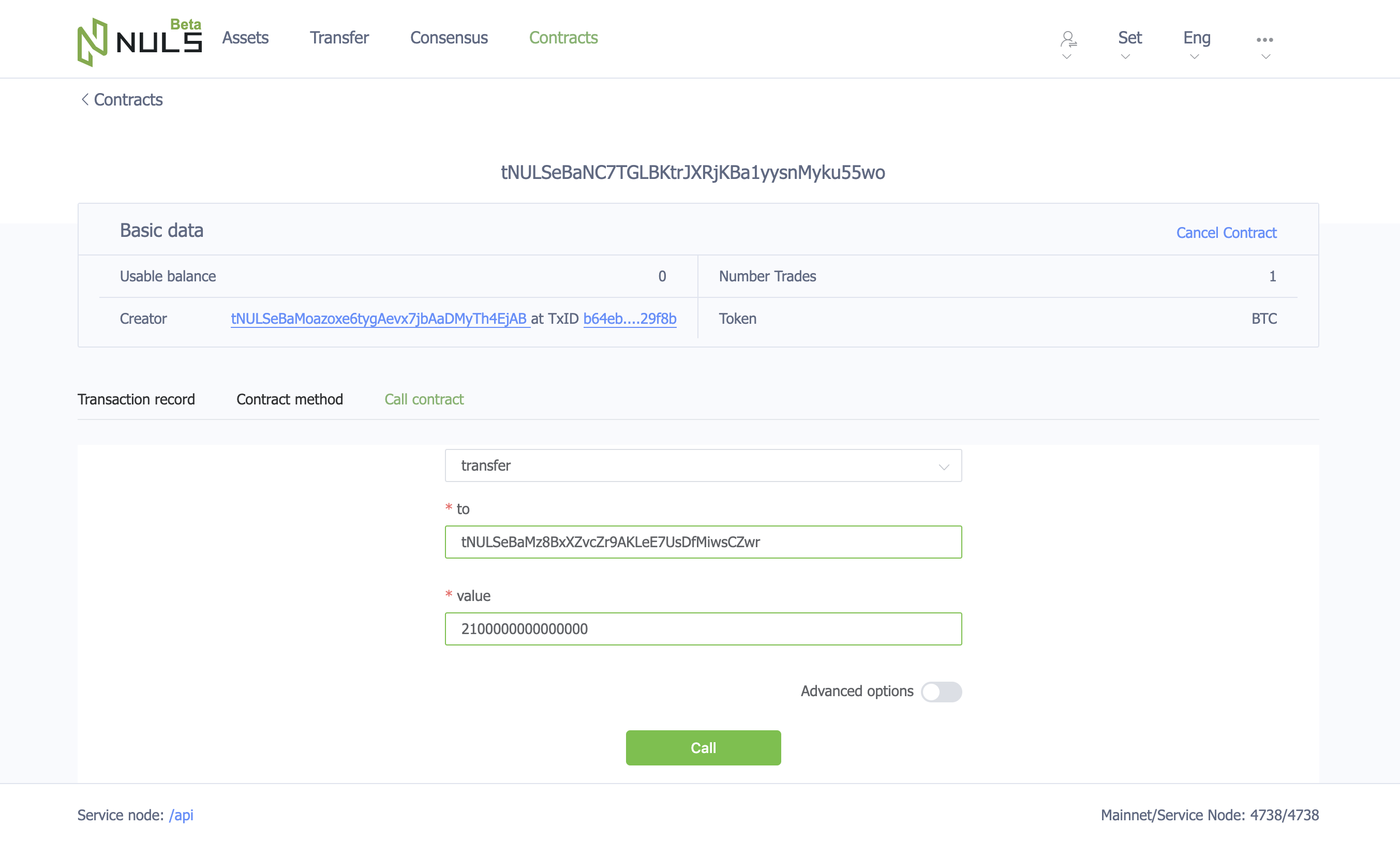 At this point, the user can already see the project information on the pocm platform and stake NULS for new tokens

On the NULS network, the reward generated by staking NULS to the consensus node will be split into two parts: 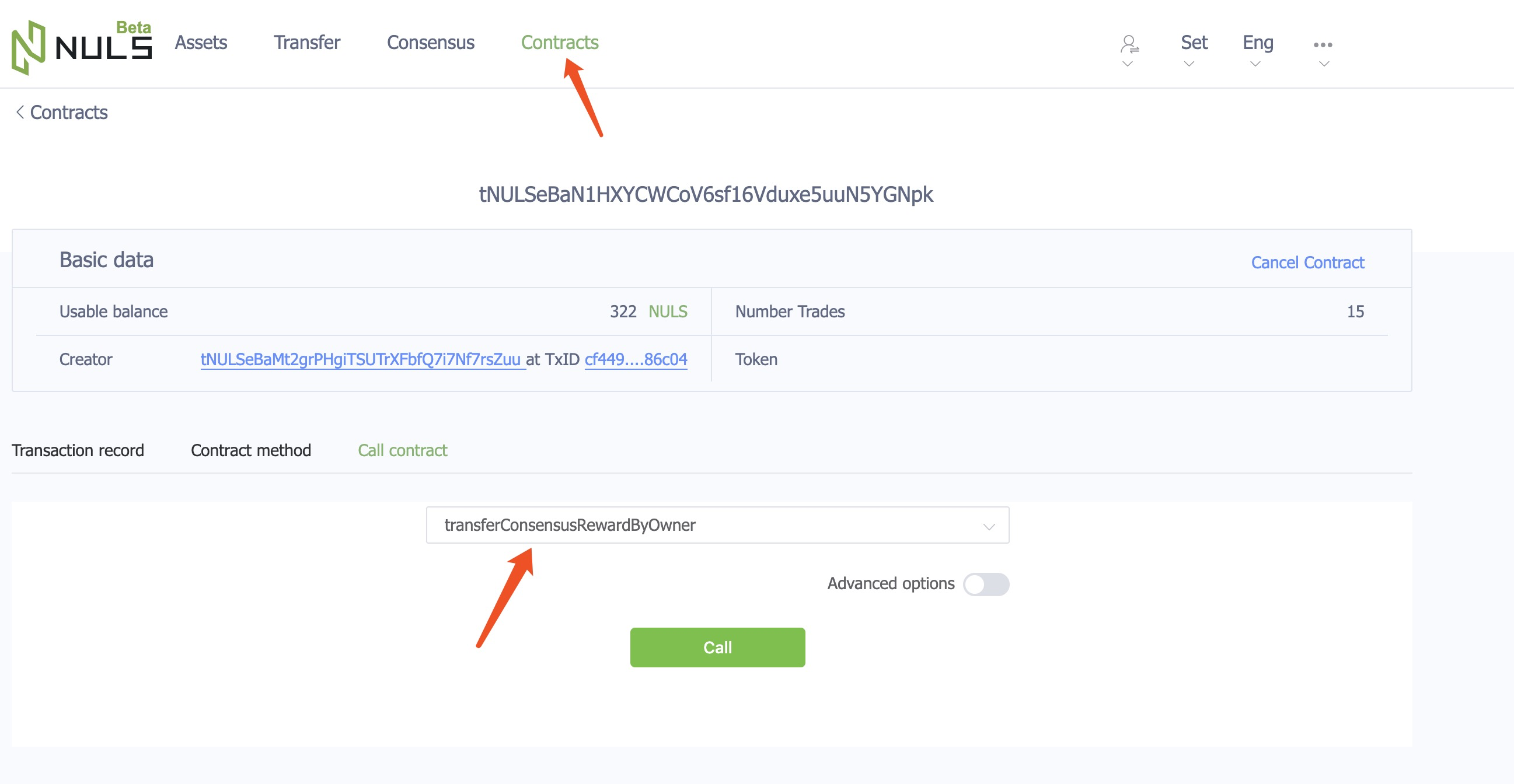 There are two ways to get a node:

How to add nodes:

On the POCM platform, click [User Center], enter the page and click [Add Node] to enter the ID of the node. 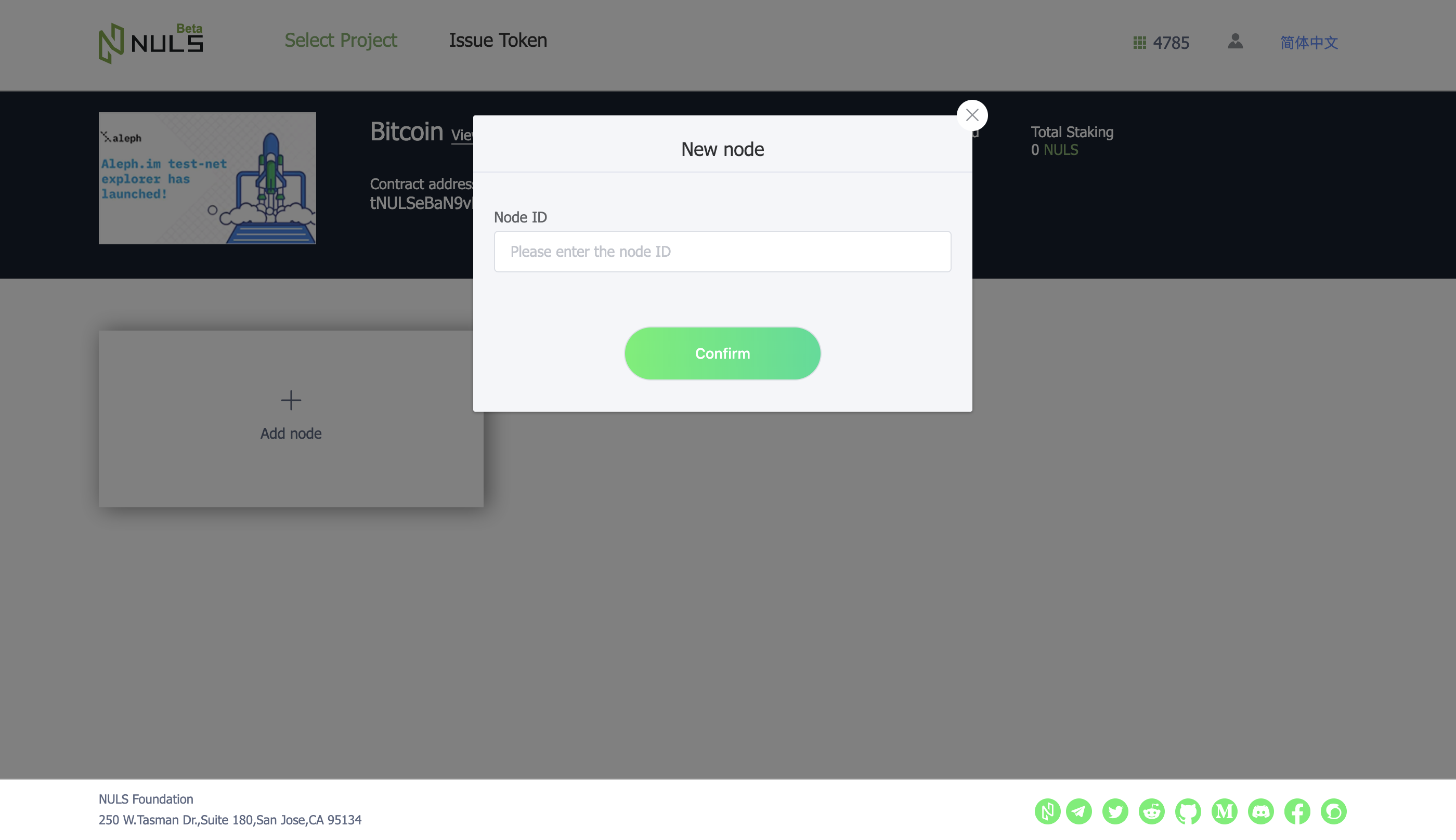 After the node is successfully added, the POCM contract will stake the NULS of the user delegated to the added nodes in turn. If there are multiple nodes, the order of staking is the order of adding the nodes. 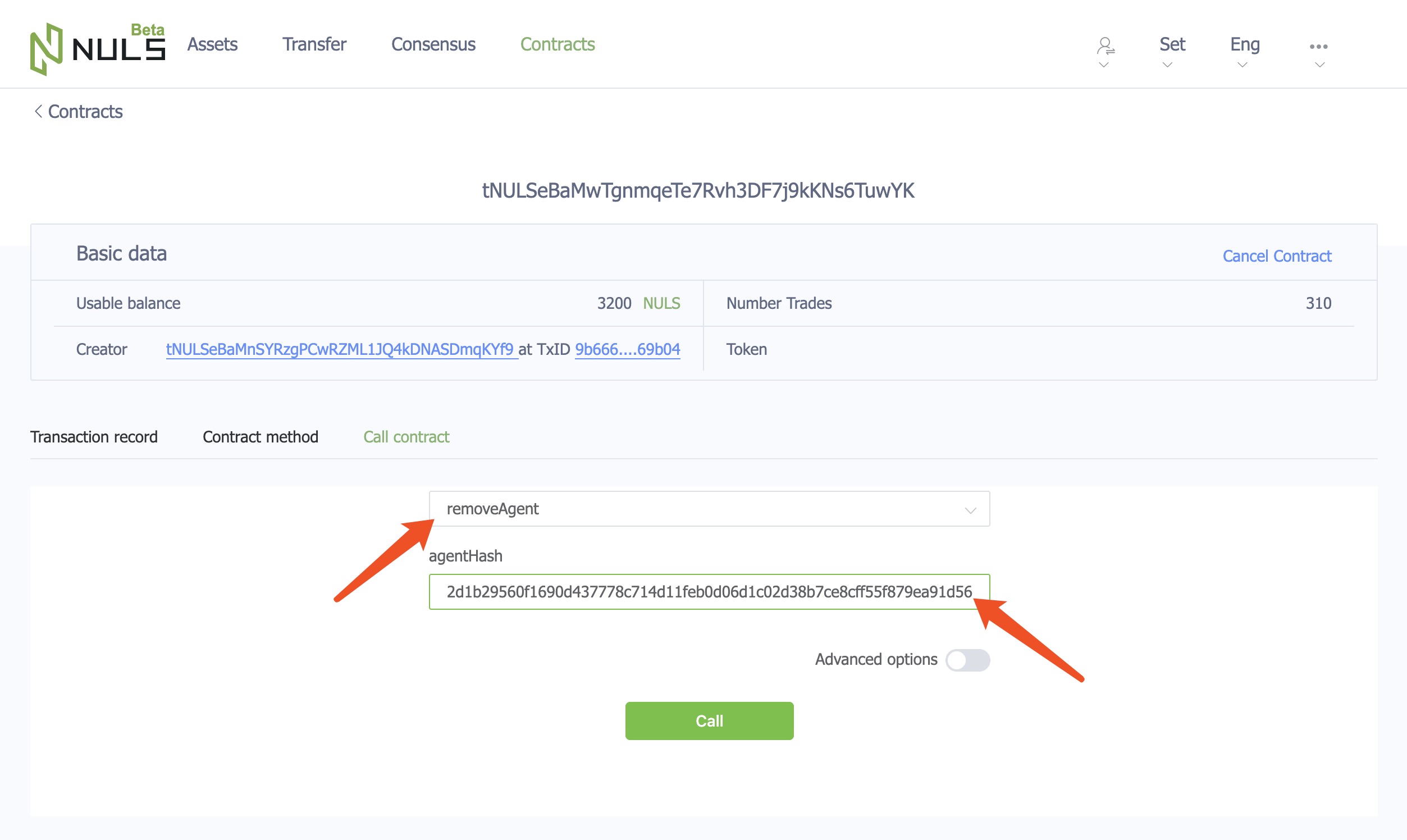 On the next version of the POCM product, you will be able to delete nodes directly on the [User Center] page. Please wait patiently.

As a consensus node On the NULS network, you can work with the project team. The way is: Project team can can add your node as the running node of the project on POCM platform, so that the NULS delegate by the users into the project contract will be automatically stake to your node. Node can obtain the following two parts of rewards

receive tokens distributed by the project: import the create address of the node on POCM platform, then enter [user center] and click [receive rewards] on the right side of the list,then you can see tokens on your wallet asset page